back
map
FROM THE INDUSTRIAL ESTATE TO THE ADVANCED NEIGHBOURHOOD: typological corrections and occupation practices 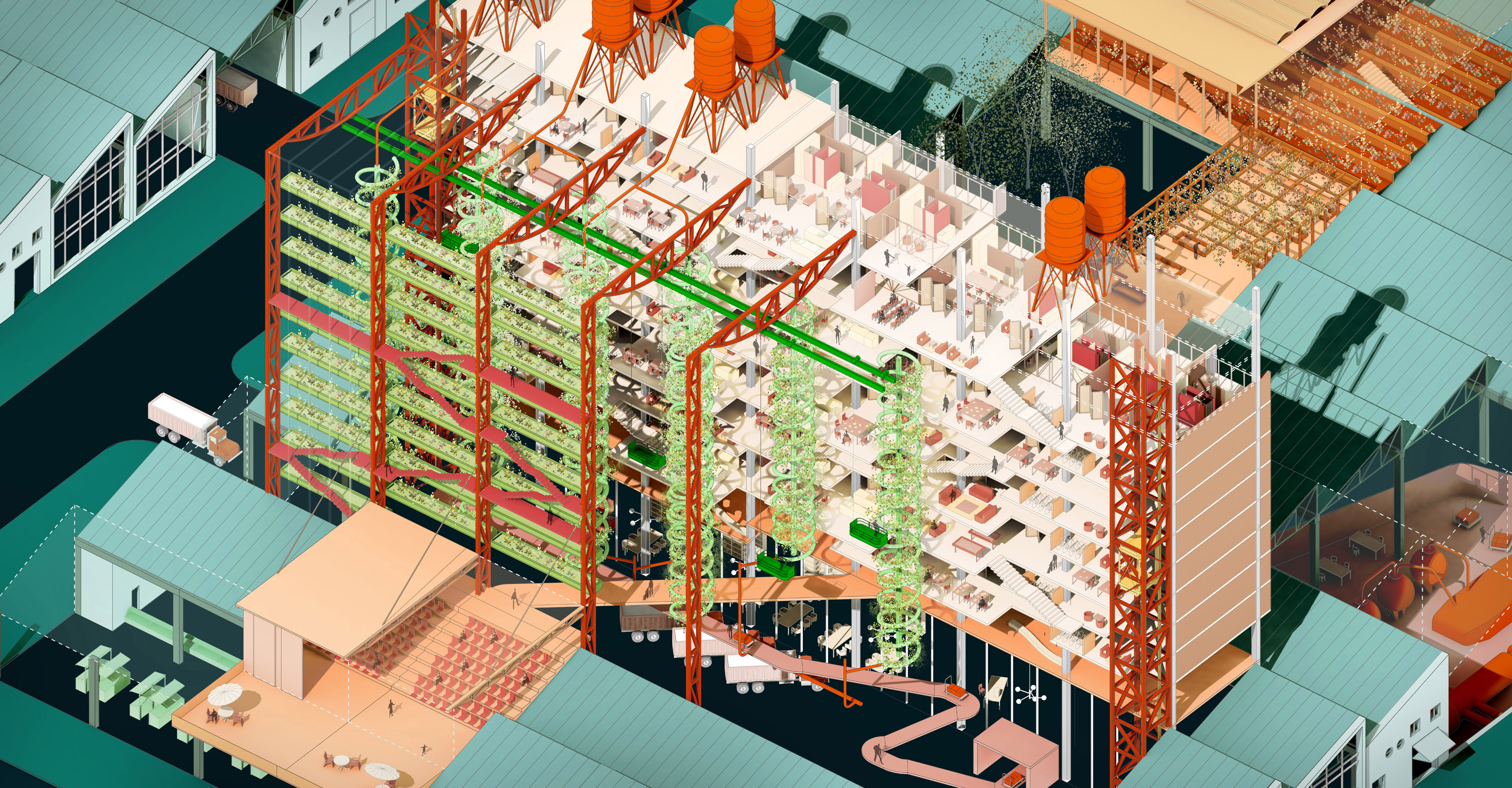 FROM THE INDUSTRIAL ESTATE TO THE ADVANCED NEIGHBOURHOOD: typological corrections and occupation practices

What defines the present? Or, to put this in another way, what aspects of today’s coordinates are of interest to architecture and where may or must it play a more prominent role in the construction of the future? The instrument most inherent to the practice of architecture is the project. The term ‘project’ itself denotes an element of exploring the unknown, motivated by experience, intuition and our intellectual and creative quests architects transform everything we do into a project The crisis we are currently undergoing is not only an economic one. It also embraces models and challenges everything we hold true change, energy and information are the raw materials inherent to the city, that utopia in permanent reconstruction beset by the worst ambitions, by savage processes of gentrification, by destruction of identities, by the rise in inequality and by the construction of false scenarios for irresponsible consumerism, all familiar processes that seem to have no limit we are overpowered by their dimensions and yet we are obliged to nurture a certain degree of optimism, of confidence in the notion that architecture has something to say and a lot to do in this setting.

The course will focus on the type of sites that nobody would ever regard as the target of covetousness on the part of those who set the processes mentioned above in motion. Nonetheless, their transformation has already begun. We refer to the apparently characterless outlying industrial districts, with their humdrum buildings in which thousands of anonymous people toil changes in systems of production and their strategic location on the edge of the city, near fast thoroughfares and on non-classified land, have converted these sites into the next target for real-estate speculation, which has set processes in motion of tertiary and residential occupation in what will most certainly become a new generation of urban districts what seemed to be valueless fragments are now claiming their share of architecture in order to face their future.

In this context our studio will develop three themes crucial to current circumstances: recycling the existing city—typological corrections—, new ways of living—re-occupations— and the need to devise new design methods—emerging practices.

Our work plan takes the form of research into reconfiguring the density, the materiality, the programmes and models of city associated with a generic industrial estate on the outskirts of Madrid. It takes into account the fact that what exists has value and, despite such architecture’s subordination to an original programme, it has the potential to burgeon into a hitherto undiscovered city when submitted to new programmes. Operations of extension, cutting, infilling, perforation, heaping and so on will be the instruments of a project that sets out to work according to different scales.

Working on the assumption that the chosen case study has a substantial load capacity, which will make the emergence of a newly-built fragment of city possible, our intention is to try out hybrid typologies that might provide new forms of socialisation, consumption, leisure and commercial and cultural practices.

FROM THE PERIPHERY TO THE CENTRE

The emergence of the post-industrial city during the seventies coincided with a drop in the residential functions of urban centres, now subjected to growing specialisation in tertiary and commercial activities, and the displacement to the peripheral belts of productive and logistical activities. In the third ring of this urban growth emerged the new housing paradigm founded on the promise of an anti-urban suburban life inspired by false contact with nature and a supposed image of social rise the price for which was paid over decades of congestion and disconnection of urban culture. Nonetheless, in recent years we have witnessed the advent of a new urban consciousness and a redefinition of the parameters of quality of life which have recovered the centre as a desirable area in which to live. In this process, the districts that touch on the edges of the centre, and among these the productive rings in regression, emerge as the perfect space in which to develop new forms of occupation and centrality.

The introduction of increased flexibility in production processes has altered the size of factories and workshops, which have become reduced and atomised to the point where many of them do not even need to occupy their own building; warehouses are tending to disappear, since they constitute an onerous liability that production in real time no longer needs; and the emergence of models such as the business park and technological and logistical complexes based on hybrid programmes associated with a new generation of clean industries compatible with residence are eroding the boundaries between housing and work, industry and university, the office and the factory. All these factors serve twenty-first-century architecture with a new work theme—the tertiarisation and ‘residentialisation’ of obsolete industrial estates—which has highly interesting economic, social, infrastructural, landscape and cultural implications.

The aim of this course is precisely to understand that these invisible islands, well connected and in contact with nature and agriculture, which have developed with their back to the city, given their dimensions and complexity and given their peripheral and infrastructural character—the city continues to survive day after day thanks to their presence—call upon us to assume responsibility for resolving the urban estrangement they generate and, at the same time, for developing the experimental potential they offer by virtue precisely of their non-classified nature, far removed from any form of conventionality.

We live in the era of knowledge networks and shared talent. The propagation of values such as cooperation versus competition is making a crucial contribution to what we refer to as the sharing economy. And the spread of such values has major repercussions on the physical characteristics of production areas, of work spaces and of forms of consumption. Proportionally, collective concerns such as growing environmental awareness and the value of free time are generating constant transformations in models of production. In the midst of these equations we find a sensitive, well-informed contemporary subject, someone unprejudiced and prepared to experiment with new ways to live in the city. This subject calls for urban models that would offer a hybrid, naturalised condition easy to re-configure, while at the same time rejecting the borderlines between work, the home and leisure time that an obsolete system of urban zonification would attempt to impose.

The theories and practices of post-occupation account for a significant portion of current architectural activity. Countries like Germany and the United States claim that over 50% of their projects focus on recycling existing architecture, while in Finland the figure rises to 70%. Such practice is revolutionising building and structural systems, energy equations, regulations hitherto blind to changing conditions and, above all, the relationship between programmes and what we call architectural typology. This is perhaps the most important work field in present-day architecture, since it challenges the myth of the ideal commission as that which produces buildings from scratch, freestanding, mono-functional and designed to last over unaltered time.

From the initial decision to the final review, our slogan will be everything is project. The project is conceived at first as an exercise on ways of reading, analysing, interpreting and describing existing conditions so that new opportunities may be generated in terms of ways to inhabit and use the city. On the basis of these opportunities we shall develop highly ambitious projects of great experimental value.

We understand that the experimental attitude is today the most competitive and most highly valued vis-à-vis those that focus on professional and compositional skills. For this reason, we understand that the pedagogical mission of the programme’s last semester is for each student to find his/her own way to draw up projects, which involves acquiring specific skills as regards the chosen lines of work. To this end, we shall work simultaneously immersed in three dimensions: large-scale transformation of the city, typological reflection as correction of existing elements and the establishment of material, constructive and spatial systems associated with deliberate choice of systems of representation.

The studio pursues the construction of a strong collective, participative spirit of confrontation with the intention of developing a critical consciousness, a capacity for argument and a constructive sense of conversation.

The Studio Travel will be to Spain. We shall stay in Madrid the entire week, visiting the site and the city’s architectural landmarks. Every other day, we shall take a high-speed train round trip to visit one different city every time guided by a prominent architect who will devote the whole trip to us, taking in his/her buildings, other favourite examples of the city’s architecture and his/her favourite culinary experience.

The students of the Madrid School of Architecture (ETSAM) Master Class are carrying out the same programme. During the trip we shall conduct a joint review with the people responsible for Madrid’s territorial policies and a one-on-one pin-up with the idea of establishing alliances in order to share information during the second part of the semester.